Previous Next
Family Business: Family Member Employee Versus a Successor

A client who managed the family business alongside his two siblings recently told me his son was graduating and he wanted to develop a plan for his son to join the business. The client wanted this successor development curriculum so he could give his son the assurance that he was being fast tracked.  He stated it was very important for his son to catch up to his cousins who entered the business six years earlier, otherwise his son may not be considered as a viable successor candidate.  I responded with an explanation that a family business could have the good fortune to have more than one successor.

The term successor does not imply that the individual is the “chosen one” and will be the next generation leader of a business.  The term simply means the person will fill a leadership or management role that is important to the continued success of the business. More appropriate and specific terms for an individual who has been selected to be the next generation leader of the business can be: successor owner, successor leader, or successor CEO.

I suggested to this client that he shouldn’t push his son to work in the family business so that down the road there would be no regrets. It’s a big world out there with lots of exciting career opportunities. I recommended he give his son some time and space. Give his son the opportunity to work elsewhere first and find out what it’s like to be a regular employee without the emotional complications of being under the family microscope.  If the son then decides he wants to come into the family business, wonderful; give him a copy of the “Family Member Employment Policy” that was adopted by the Board about 10 years earlier. Then try to find him an available position within the company but hold off on the successor fast tracking. Allow him to come into the family business as just an employee to confirm if he likes the industry and working with family members or if he wants to consider other options.

As our discussion continued, I contended there would be plenty of time for training and development, pointing out that not every Family Member Employee is cut out to be a successor and not all successors are cut out to be the successor leader. Nevertheless, all family members who abide by reasonable Family Member Employee Performance Expectations would have an opportunity to explore career opportunities and show what they can do. I suggested that there be no hurry; the most important aspect of his son’s career is that he will have a genuine passion for what he is doing, not just competition with cousins based upon jealousy and rivalry. After he demonstrated his focus and commitment over a few years, he would be welcomed into a Successor Development Program that would prepare him to become a successor and contributing leader filling an important role to the success and succession of the business.

My client was not totally buying what I was selling but got the drift that it was in no one’s best interest to pigeon hole his son in the family business.  It was evident this client was still competing with his siblings because he was not happy with my contention that we couldn’t change the fact his son was six years younger than his closest cousin. He did seem slightly more accepting though when I explained that today—with his son on the starting line—a six year head start may look like an insurmountable difference; however, in ten years the difference in age and experience could be irrelevant assuming his son was the best candidate. 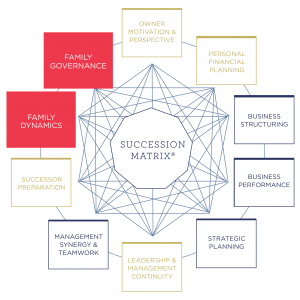